What Responsible Breeders Really Do 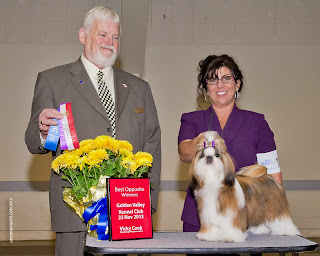 Fromm Chicken Ala Veg
Posted by Stacy B at 3:47 PM No comments:

Shih Tzu’s are known to be gentle, happy, lively, friendly, courageous, affectionate, and never afraid to provide their humans with licks of love.

Shih Tzu are best know to be the pet who wants to be a loyal companion to their  owners. They are essentially everything that you need companion  to be. This is why the Shih Tzu Temperament is very happy, friendly, affectionate, outgoing and trusting. Even without such a Temperament, this small dog breed are the first to win our hearts with their adorable hair covered faces and fluffy bodies!
With the Shih Tzu Temperament being so centered around it’s owner,  they need to be put in a healthy and loving environment. It is also essential to let them be with their breeder and mother for quite a couple of weeks before they are going to their forever home so that they have the strong social skills needed to be part of a family. Any good breeder who knows about the Shih Tzu Temperament will do this .
Shih Tzu’s are known to the “little lions” and they for sure act their part. They are little love bugs who are great apartment dogs and can live in big homes since they are so small. The Shih Tzu Temperament is good enough to get along with any other pets. They are excellent for large families. The Shih Tzu Temperament is also well suited for single people and the elderly. They are very well behaved. They are also very adorable and loving looking with their under bite!
Posted by Stacy B at 3:10 PM No comments: 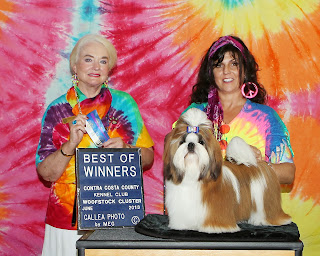 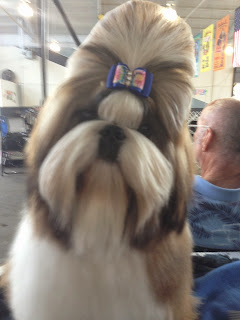 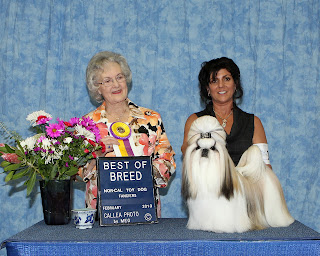 I have the honor of being awarded AKC Breeder of Merit

We are proud to announce our award for ,

Breeder of Merit
Posted by Stacy B at 11:35 AM No comments:

Recent studies in the U.S. and the U.K. have produced significant evidence to support very limited use of vaccines in dogs and cats.  Current recommendations are as follows:
Dog’s and cat’s immune systems are mature by four to six months of age.  The most conservative vaccine schedule would include puppy shots and a final one year booster.
The “puppy shot combo” is good for at least eight years and should not be repeated for the life of the dog (or cat).  I use the four month maturity cut-off for my own dogs with no booster as per Dr. Schultz. (School of Veterinary Medicine, University of Wisconsin-Madison)
Do not re-vaccinate your dog (or cat) with core vaccines.  The bordatella vaccine has shorter (9-12 months) duration.  It is required for boarding although there is little evidence that it will be effective in warding off infection.  Use only the nasal application.   If your dog gets “kennel cough”, it is generally mild and self-limiting and does not respond to medication, much like the common cold.
Rabies vaccines are required every three years although they last more like 7 to 10 years. A current challenge is in progress in hopes of bringing the law into line with current vaccine research. http://www.rabieschallengefund.org/
Other vaccines available but not recommended due to adverse effects and/or lack of effectiveness are:
Lyme vaccine,  Coronavirus,  Giardiasis,  and Rattlesnake envenomation.  (Home School of Veterinary Medicine UC Davis).
There are many harmful effects of over vaccination, including:
Autoimmune hemolytic anemia (usually fatal), Brain and nervous system damage, Encephalitis, Vaccine induced cancers,  Anaphylactic shock (massive allergic reaction),  Epilepsy and seizures,  Behavioral problems; anxiety or aggression and Allergies.
These and other adverse effects are being reported from studies compiled by Catherine O’Driscoll canine-health-concern.org.uk
We came across an article about the new drug ProHeart 6 that is being prescribed for heartworm prevention.  A 6 year old healthy dog named Jack died unexpectedly after receiving the drug ProHeart 6.  You can read more about Jack’s story here.
Don’t be afraid to talk to your veterinarian about your questions and concerns of over vaccinating.  It could not only extend the lifespan of your dog, but save it’s life.
Posted by Stacy B at 12:00 PM No comments:


Antiseptics and disinfectants are both related to microbiology. These are chemicals frequently used to stop or reduce microbial growth and thereby prevent the spread of infections and diseases, as well as to stop contaminations. Some chemicals belong to both categories showing that the difference is not based on the chemical structure but the application.
Antiseptics
Antiseptics are chemicals used to destroy microorganisms on living tissue/body. This is essential in preventing infection sepsis “wounds are getting worse” with further microbial infections. Antiseptics could be against bacteria, fungi, or a wide range of organisms. Depending on the application, they are identified as antibacterial, antifungal etc. Some antiseptics can destroy microorganisms completely, and some can only prevent growth or multiplication. Antiseptics were first introduced by Joseph Lister to be used in surgical processes upon observing that people die after surgery, due to post surgery infections on wounds. Louis Pasteur also worked on the same field and introduced many developments.
Among the common antiseptics, alcohol, also known as surgical spirit, is famous and one of the first ever antiseptics used. Boric acid is used for vaginal yeast infections and in eyewash. Hydrogen peroxide is used to clean wounds. Iodine is frequently used in hospitals for pre and post-surgery cleansing. Sodium chloride, sodium carbonate, phenols, and many others are also used depending on the application. One important feature that antiseptics should hold is to be harmless or do minimal damage to live tissue. If the antiseptic damages human body, it could not be used efficiently.
Disinfectants
Many chemicals belong to the class of disinfectants. These chemicals are used to destroy microorganisms on non-living surfaces and objects. Disinfectants may destroy bacteria or fungi by interfering with their metabolism or by disrupting cell walls. These are frequently used in hospitals, surgery rooms, kitchens and bathrooms where microorganisms have the chance to grow rapidly and spread diseases exponentially. Ideal disinfectant may fully sterilize a surface, but it is not the case always. When these chemicals are applied some microorganisms build resistance against them and make the situation worse. Therefore, sometimes the concentrations used may have to be elevated.
Alcohols, aldehydes, oxidizing agents, and household bleach are very popular disinfectants. Iodine, ozone, silver, and copper salts are also used depending on the application. UV light is also used as a disinfectant when disinfectant should be applied without wetting a surface or when frequent disinfection is necessary. Disinfectants are quite harsh compared to antiseptics because they have to work on surfaces with many types of microorganisms. Disinfectants are most of the time “broad- spectrum” cleaners due to this reason. Disinfectants are very strong chemicals, and they cannot be used instead of antiseptics in almost all situations because they are toxic and damage living tissues.
What is the difference between Antiseptic and Disinfectant?
• Antiseptics are used to destroy microorganisms on living tissues, but disinfectants are used to destroy microorganisms on surfaces and non-living objects.
• Antiseptics should be harmless or with minimal harm to live tissues, but disinfectants should not necessarily be harmless to tissues because they are not directly applied. However, encounter with the human body should be minimal.

Read more: http://www.differencebetween.com/difference-between-antiseptic-and-vs-disinfectant/#ixzz2OfLZe9u8
Posted by Stacy B at 11:58 AM No comments:

As with any other new tool, you should take the time to familiarize your dog with the treadmill before you use it. Start by introducing your dog to a non-running treadmill. Let them sniff around it and get used to the smell, then let them stand on it, again while it is not running.
Some dogs take to standing on the treadmill right away, while others may become nervous if they can feel the platform wobbling slightly. If your dog is hesitant about standing on the treadmill, use a pleasant scent or a treat to lead them onto it and repeat until your dog is no longer nervous, using the pleasant stimulus to create a positive association.
Once your dog is used to standing on the treadmill calmly, then you can start it out at its lowest speed. Most dogs will naturally begin walking, although you should have your dog attached by a short lead to the front of the treadmill at this point.
You would be amazed at how quickly a lot of dogs take to the idea once the treadmill is in motion, because it allows them to run. They don’t necessarily care that they aren’t going anywhere, and the side-rails on a treadmill designed for dogs keeps them focused forward. Once they get the idea, some dogs will actually get on the treadmill themselves, looking for their human to start it up. To them, it’s just as exciting as going for a walk or a ride in the car.
I hope this helps to answer a lot of the questions I’ve received about treadmills. Like a specific kind of lead, a backpack, or a clicker, a treadmill is just a tool. It isn’t meant to replace the walk all the time, but it can be a valuable part of my Exercise, Discipline, and Affection fulfillment formula when used in the right way and for the right reasons.


Read more: http://www.cesarsway.com/dogtraining/exercise/Everything-You-Wanted-to-Know-About-Treadmills?utm_source=BlueHornet&utm_medium=email&utm_campaign=Mar13Treadmills#ixzz2NQydrgsp
Posted by Stacy B at 10:32 AM No comments: 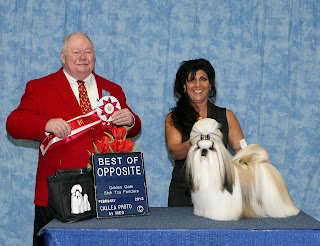 Great day at the GGSTF Specialty.
Stacey B's Kissed By An Angel "Krissy" wins BOS
We had a great time with friends.