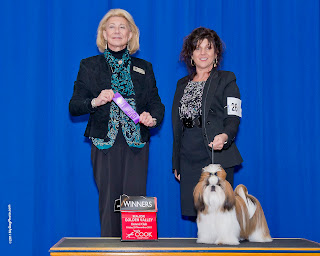 We are your best resource for any animal poison-related emergency, 24 hours a day, 365 days a year. If you think that your pet may have ingested a potentially poisonous substance, call (888) 426-4435. A $65 consultation fee may be applied to your credit card.

Foods to Avoid Feeding Your Pet

From chocolate to alcohol, some items are not meant for our furry friends. »

If Your Pet Is Poisoned

What to do if the unthinkable happens.
Learn More »

Emergency Care for Your Dog

Check out our life-saving answers to your most common questions.
Learn More »

Poinsettias: Okay or No Way?

Learn the straight facts about this pretty plant.
Learn More »

Make your home poison-proof with this handy checklist.
Learn More »


Ask the Experts: Okay or No Way?

Is chocolate as dangerous for cats as it is for dogs? —Carla H.
Carla, while dogs tend to be most commonly affected largely due to their eating habits, chocolate can indeed be toxic to cats, as well as other pets. Depending on the type and amount ingested, chocolate can cause vomiting, diarrhea, hyperactivity, panting, abnormal heart rhythm, tremors, seizures—and even death in severe cases. Because of its toxic potential, we would advise against allowing your cat to consume chocolate.
View More Questions: Human Medications and Cosmetics »
Cleaning Products » | People Foods » | Plants and Trees » | Insects »
Miscellaneous » | Browse All »
Posted by Stacy B at 1:46 PM No comments:

Photo of: Stacey B's Glitter In The Air "Pink"
San Luis Obisbo
Posted by Stacy B at 10:54 AM No comments:

a dash of lion,
several teaspoons of rabbit,
a couple ounces of domestic cat,
one part court jester,
a dash of ballerina,
a pinch of old man(Chinese)
a bit of beggar,
tablespoon of monkey,
one part baby seal,
a dash of teddy bear,and the rest of the dogs of Tibetan and Chinese origin

described by: James Mumford
Posted by Stacy B at 10:57 AM No comments:

overvaccinating... more is NOT better

Taking blood for an annual titer test, to check a dog’s level of immune defenses, should replace the habit of vaccinating dogs annually whether or not they need it.

Lifelong Immunity – Why Vets Are Pushing Back

The duration of immunity for Rabies vaccine, Canine distemper vaccine, Canine Parvovirus vaccine, Feline Panleukopenia vaccine, Feline Rhinotracheitis, feline Calicivirus, have all been demonstrated to be a minimum of 7 years by serology for rabies and challenge studies for all others.
In the Duration of Immunity to Canine Vaccines: What We Know and What We Don’t Know, Proceedings – Canine Infectious Diseases: From Clinics to Molecular Pathogenesis, Ithaca, NY, 1999, Dr. Ronald Schultz, a veterinary immunologist at the forefront of vaccine research and chair of the University of Wisconsin’s Department of Pathobiological Sciences, outlines the DOI for the following vaccines:

Distemper- 7 years by challenge/15 years by serology
Parvovirus – 7 years by challenge/ 7 years by serology
Adenovirus – 7 years by challenge/ 9 years by serology
Canine rabies – 3 years by challenge/ 7 years by serology
Dr. Schultz concludes:  “Vaccines for diseases like distemper and canine parvovirus, once administered to adult animals, provide lifetime immunity.”  “Are we vaccinating too much?” JAVMA, No. 4, August 15, 1995, pg. 421.
Yet vets continue to vaccinate annually.  Dog owners feel that their vets are doing their dogs a great service by vaccinating every three years instead of annually – why do we allow it when these studies were done over thirty years ago and have been replicated time and again by other researchers?
Ian Tizard states:  “With modified live virus vaccines like canine parvovirus, canine distemper and feline panleukopenia, calicivirus, and rhinotracheitis the virus in the vaccine must replicate to stimulate the immune system. In a patient that has been previously immunized, antibodies from the previous vaccine will block the replication of the new vaccinal virus. Antibody titers are not significantly boosted. Memory cell populations are not expanded. The immune status of the patient is not enhanced.
After the second rabies vaccination, re-administration of rabies vaccine does not enhance the immune status of the patient at one or two year intervals.  We do not know the interval at which re-administration of vaccines will enhance the immunity of a significant percentage of the pet population, but it is certainly not at one or two year intervals.
Tizard Ian, Yawei N, Use of serologic testing to assess immune status of companion animals, JAVMA, vol 213, No 1, July 1, 1998.
“The recommendation for annual re-vaccination is a practice that was officially started in 1978.”  says Dr. Schultz.  “This recommendation was made without any scientific validation of the need to booster immunity so frequently. In fact the presence of good humoral antibody levels blocks the anamnestic response to vaccine boosters just as maternal antibody blocks the response in some young animals.”
He adds:  “The patient receives no benefit and may be placed at serious risk when an unnecessary vaccine is given. Few or no scientific studies have demonstrated a need for cats or dogs to be revaccinated. Annual vaccination for diseases caused by CDV, CPV2, FPLP and FeLV has not been shown to provide a level of immunity any different from the immunity in an animal vaccinated and immunized at an early age and challenged years later. We have found that annual revaccination with the vaccines that provide long-term immunity provides no demonstrable benefit.”
Why then, have vets not embraced the concept of lifelong immunity in dogs?
“Profits are what vaccine critics believe is at the root of the profession’s resistance to update its protocols. Without the lure of vaccines, clients might be less inclined to make yearly veterinary visits. Vaccines add up to 14 percent of the average practice’s income, AAHA reports, and veterinarians stand to lose big.  I suspect some are ignoring my work,” says Schultz, who claims some distemper vaccines last as long as 15 years. “Tying vaccinations into the annual visit became prominent in the 1980s and a way of practicing in the 1990s. Now veterinarians don’t want to give it up.”
The report of the American Animal Hospital Association Canine Vaccine Taskforce in JAAHA (39 March/April 2003)3 includes the following information for vets:
‘Misunderstanding, misinformation and the conservative nature of our profession have largely slowed adoption of protocols advocating decreased frequency of vaccination’; ‘Immunological memory provides durations of immunity for core infectious diseases that far exceed the traditional recommendations for annual vaccination.’
‘This is supported by a growing body of veterinary information  as well-developed epidemiological vigilance in human medicine that indicates immunity induced by vaccination is extremely long lasting and, in most cases, lifelong.’
Both the AAHA and the AVMA must do more to “step up to the plate” says noted immunologist, Dr. Richard Ford. But the reality is the vets do not have to listen to the AAHA or the AVMA and it appears the state veterinary medical boards are not interested in enforcing vaccine schedules, opting to leave it up to the individual vet.
Dr. Bob Rogers hired a Chicago based law firm and initiated a class action suit for pet owners who were not given informed consent and full disclosure prior to vaccination administration. His article entitled “The Courage to Embrace the Truth”, states “While attending conferences like WSVMA and NAVMC I have asked over 400 DVMs from various parts of the country if they attended the seminars on New Vaccination Protocols. I was told by all but one, “I don’t care what the data says, I am not changing.” One DVM here on VIN even said “I am not changing until the AVMA makes me change.”
It seems that pet owners are against the wall when it comes to vaccination. The obvious conclusion is that pet owners who are concerned about the long term health of their companion animals must take it upon themselves to research vaccines, duration of immunity and vaccine dangers. At the very least, question every vaccine that goes into your animal – but none of the above information indicates you will get an honest or well-informed answer.
Be your dog’s advocate – protect him with knowledge and by taking a stand against unnecessary vaccination. His life may depend on it!
Posted by Stacy B at 10:20 AM No comments:

Cargill has announced a voluntary dog food recall involving two of its brands due to contamination with aflatoxin.
Both River Run and Marksman dry dog foods were produced at Cargill’s Lecompte, Louisiana plant.
The recall includes 13 states and 2 territories: Kansas, Missouri, Northeast Oklahoma, Arkansas, Louisiana, Mississippi, Tennessee, Western Kentucky, Southeast Indiana, Southern Illinois, Hawaii, and limited areas of Florida, California Guam, and the Virgin Islands.
Aflatoxin is a toxin produced by a certain species of mold commonly found in cereal grains.
The products listed have Lot Codes 4K0335 through 4K0365, 4K1001 through 4K1335, LL0335 through LL0365, and LL1001 through LL1335 on the tag or bag and include:


What to Watch For


“Exposure to excessive levels of aflatoxin, especially over extended periods of time, can lead to reduced liver function.
Call your veterinarian if your dog has had a product that may have contained aflatoxin and exhibits sluggishness or lethargy combined with a reluctance to eat, vomiting, diarrhea, or yellowing of the eyes or gums.”

If a dog shows any of these signs, consumers should stop feeding the suspected products immediately — and consult a veterinarian.
You can report complaints about FDA-regulated pet food products by calling the consumer complaint coordinator in your area.
Or go to http://www.fda.gov/petfoodcomplaints.
Cargill has suggested consumers return any unused portion of the recalled dog food to the store where it was bought for a full refund. For more information, call the company at 855-460-1532.


Where to Buy Dog Food at a Store Near You
or
Shop at an Online Retailer - Free Shipping
Posted by Stacy B at 10:02 AM No comments: 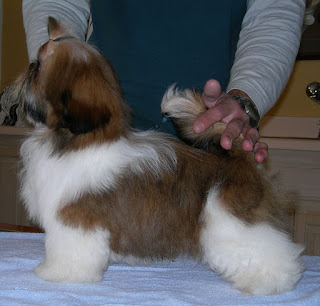 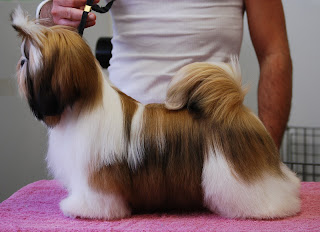 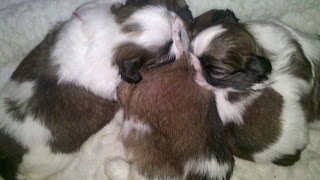 photo's of Romi x Barbie 25 day old pups. My new show prospects.
Posted by Stacy B at 4:48 PM No comments:

We have a record-breaking entry at AENC this year! Will you be joining us as a competitor or spectator?